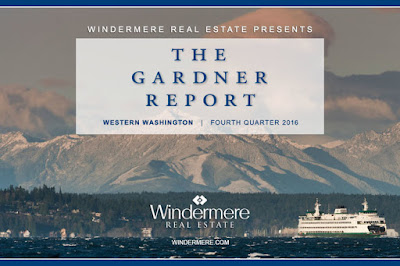 Here is the latest from Windermere's chief economist, Matthew Gardner. 2017 should continue to be a strong seller's market, though inventory may improve to some extent.


ECONOMIC OVERVIEW
Washington State finished the year on a high with jobs continuing to be added across the market. Additionally, we are seeing decent growth in the area’s smaller markets, which have not benefitted from the same robust growth as the larger metropolitan markets.
Unemployment rates throughout the region continue to drop and the levels in the central Puget Sound region suggest that we are at full employment. In the coming year, I anticipate that we will see substantial income growth as companies look to recruit new talent and keep existing employees happy.

This speedometer reflects the state of the region’s housing market using housing inventory, price gains, sales velocities, interest rates, and larger economic factors. For the fourth quarter of 2016, I actually moved the needle a little more in favor of buyers, but this is purely a function of the increase in interest rates that was seen after the election. Higher borrowing costs mean that buyers can afford less, which could ultimately put some modest downward pressure on home prices in 2017. That said, the region will still strongly favor sellers in the coming year.